Warning: "continue" targeting switch is equivalent to "break". Did you mean to use "continue 2"? in /homepages/46/d238209864/htdocs/blog/wp-content/plugins/wordfence/models/block/wfBlock.php on line 573
 Maccabees | The Center for Self Mastery 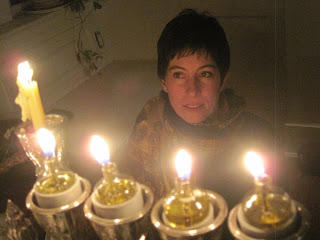 A Lesson in Metaphysics from a Street Drain, Hot Ice, and the Chanuka Flames

Marion Place surrounded a wild field where scorpions roamed and hardi-ha birds nested. We lived at number 66 and the field was our other playground. I loved the rawness of the place. There were large stones on which to sit and dream, and places to hide in play. The street circled the field like a belt. Beneath it ran a drain gutter. Etched in my memory like scratches in the tar is the recollection of lowering my body into the channel, raising my hands to receive the pushcart passed to me, taking my seat and gazing down the tube whose only light came from rain drains up above. G-d knows what could have been if the heavens opened and flooded the intestine of the road. But time and again I took off, racing faster and faster down the hill, fleeting beneath the slatted light, and finally curving to a halt at the bottom of the hill. Then the long walk back and the haul out. Each ride was always a first!

The upside of the street held its pleasures too. Sitting on the rubber tire swing, we read stories about children who sold lemonade on the curb. They were stories of other lands. No one really passed Marion Place other than the people who lived there. And no one was interested in buying lemonade, or the biscuits we baked. But that didn’t stop us from setting up our stand. And then we’d wait, like Charlie Brown, for the elusive customer who never came.

What children did buy was ice-cream. The ice-cream man rode by most afternoons. His skin burnished deep and dark. He rode a bike to which a large box was attached at the front. It was filled with hot ice. Playing on the front lawn, shaded by a garden-bed packed tight with aloes and stralitzias, we’d hear his bell. It was a tin manual one, strapped with string to the handlebar. Inside the darkness of the box his ice smoked, its metallic smell mixed with that of the sugars and chocolates of the ice creams. Oh how good it was to dip my hand into the black space and pull up wrappers of different colors, searching for the chocolate cone, the orange sorbet, the milky bar…

It was a Sunday when I learned how hot the cold was. Dad offered the ice-cream man some extra pennies for a chunk of the stuff and cut a deal. He pulled on the work gloves tucked into his pocket and lifted the ice from the darkness. It smoked white and hard against the backdrop of his shirt, then past the shrubbery and along the red brick wall that skirted the driveway.

“Come see,” he said, walking towards the pool.

He was our Pied Piper, leading us to the water that glistened beneath the sun. Smells of chlorine and fermenting peaches mingled in the air.

“No ways,” I bounced, reaching my hand out.

It sure did, sticking to my skin and holding it as I pulled back in surprise.

“Step away,” he said, flinging the ice into the water.

Boom! It exploded in an instant, a white volcanic eruption right there in the very water we splashed about in noon-after-long-African-afternoon. Our mild pool, reserved for gentle play, or spirited dives and games of Marco-Polo at most, was spewing forth hot vents as if it were a deep dark ocean bed. Bubbles burst to the surface and popped open from the blue below. It fascinated me that something so cold worked like fire. The ice burned a memory within me.

It was one of those days you don’t get the full significance of until later. I frequently return to the black tar and the open veld. To the street’s underbelly with its slatted light. To memories of my father. I am standing poolside and the ice is burning, bubbling. It frightens me. And it excites me. Was it that even then at the age of ten I intuited the questions I would only articulate with the weight of a couple more years? Are things as they appear to be? Or is everything also its opposite? Is heat hot? Or is it cold as well? Is ice fire? And am I no-thing?

I think of that day and ponder most deeply how each thing contains its opposite as I sit before the fluttering glow of the Chanuka lights and our children twirl their dreidels, tossing hazel nuts at each other across the floor. I gaze at the flames. They are born of oil rather than wax and glow gold against the doorway, luminously balancing the mezuzah which shines behind my back. They pull me in to their glimmer. At the epicenter float black cords – silent charred strands blacker than night. Yet it is this darkness that feeds the fire. Each wick is framed by a purple light itself surrounded by a pale light, and then ephemerally framed by a halo hovering between matter and spirit. I look at the flames and then I’m standing at the pool watching the ice burn. Just as that moment was soaked with contradiction; it jars my mind that the black wick is the core of the plasma and halo. How is so much light and such radiance born of the charred stuff? And how is it that the fire is hottest right there where the wick is dying?

In some way gliding on my rocker with the lights on low as the flames multiply night to night, I sense I am sitting before the secrets I spend my life in search of. The flames are a parable not only of my body and soul but also of my purpose. The black wick is my body, the flame is the G-dliness my labors of love generate, and the oil the Divine deeds enacted each day that fuel the fire.

The body sweats and excretes, desires pleasure, decays and dies. Even in its prime it proclaims its limits. It is black in death and albeit pink, is black in birth. But the inner dimension of that darkness is brilliance. It is shining luminescent G-dliness. With my body I birthed our children. My wick is the fulcrum from which I host guests, give charity, wipe a bleeding nose, sweep the floor, light the lamps. My body serves my life just as the wick serves the flame. In the same way that the cotton cord is the anchor for the light so too is my physical existence the anchor and support for my entire existence.

The world itself, the very matter I engage with, is also a wick. Black beans. Black table. Black fruit which even in its robust sweetness is decaying. A world of wicks. The universe is matter that in and of itself is dense and dark even as it is pleasurable. But – and this is the crux of it all – when I use that world in service of the Divine, it becomes a source for Divine radiance. This is our deepest purpose. To be lamplighters.

So dark is light, and black matter is G-dliness. Each thing is transmutable. The principal holds true for every act mandated by G-d. A mitzvah is a candle. But the two mitzvot that most embody this principal are the Shabbat and Chanukah candles. Both shine forth the secret that counter-intuitively each entity holds within itself its contrary dimension. Each shines forth the message that the darkness of matter is in essence Divine light when properly channeled. Beside the menorah, our children play. The dreidel spins…Everything is in motion, each thing is itself and simultaneously its opposite. The oil has become flames and the flames are light and the light is the desire of G-d. G-d’s presence is hovering manifest in our dining room, shining at us from the cups of oil.

This notion that matter can be transformed is uniquely Jewish. That’s why it so irked the Greeks. “You want to philosophize? Fine. Go ahead and indulge in pleasure. But don’t come telling us that you can take a wick and turn it into a holy flame. Don’t spew nonsense proclaiming that oil squeezed from a bitter olive can be sacred!” And so, in violent reaction to the radical notion that ice is fire and black is light and matter is Divine, they ransacked the Temple looking for…for what?! For cruses of oil! They would not, could not have us calling out that either physical pleasure or philosophical inquiry or anything in between can be G-dly.

A small group of radicals persevered. They were the visionaries of their generation. They knew the secrets of ice and fire and light. And their entirely non-logical relationship to reality undid an entire army bent on their destruction. They lived from the place of the impossible. Their grasp of the contradictions inherent in reality enabled them to re-invent the way people saw themselves. They gave us back our access to the wondrous principal, “Let there be light.” At the very outset of the creative process, “in the beginning,” G-d told us our mandate was to bring forth the light from all the chaos. The Maccabees took that command and ran with it. The G-dliness they generated captured the primordial vision of G-d and still shines forth from each Chanukah candelabra lit anywhere on the globe. Let there be light.

With this point I can risk the death of my ego. Let it burn! The death will be a birth. Through the surrender of selfhood and in giving over our personal willfulness to the will of G-d, we generate light. We do not have to hold on to the external form of reality. Entering the hidden opposite dimension sets us free. Existence is transmutable. When I think of Marion Place, I realize that the drain belly of that crescent was as sweet for me as the ice-cream lying in the box above. And the tar was as black as the belly. It was always the same street, just top and bottom. Both were dark and both were sweet. Even in the bowels, there was a thrill. Even in the cold, damp darkness the pushcart raced beneath the grids of light and filled my heart with heated joy.

This article was originally published on www.thejewishwoman.org. If you’re a writer, submit your work to the editor Sarah Esther Crispe here.